A few weeks ago, the husband and I returned from our second vacation of the summer.

In early June, we traveled to Florida with my family. We invaded a 15th floor condo, beach bummed all day, mediated spats between boys ages 6 and 3, and read the same two Bearenstein Bears books over and over again to those boys.

We ate out a ton, and then bummed it some more. This has always been my family’s picture of vacation. It’s not that we’re inactive or unwilling to hike trails or cruise on the lake or visit historical monuments. We just seem to be our best selves, together, when we have emotional and mental space that only the beach seems to bring. It was lovely. 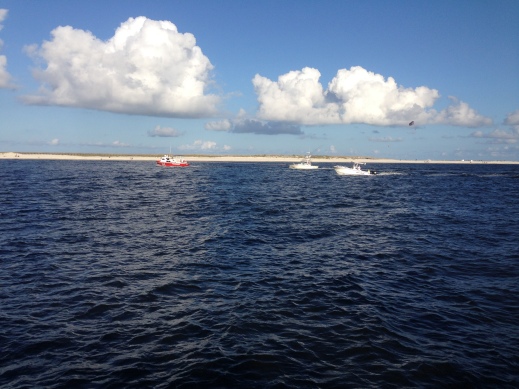 Three weeks later, we left for another vacation –  again to Florida –  but with Thomas’ side of the family.

I learned to paddle board, despite not being able to stand for more than 10 seconds in the ocean. We kayaked in the bay, and laughed and cheered as Delilah pranced her way through and over low waves that lapped up hard against her chest. And we bought way more ice cream and waffle cones than we needed. This vacation, too, was meaningful in very distinct ways.

The first trip challenged the subconscious urge to check social media and email and instead dedicate myself to one novel. I wanted to slow down, and write more and remember what it was like to simply be without accomplishing something.

The second trip emphasized people. We now only see some family members a few times a year, so those were days to enjoy each other, catch up and do as families do. And because I didn’t want to be left out, I ended up hopping on a paddle board, too.

I began noticing in high school that I perceive these moments as pieces of narrative – small snippets of eloquent language that appear on a simple, imagined pages. Not so coincidentally, I experience this when I’m most aware of my surroundings. When I’m quiet and pay attention.

Like when I watched my sister-in-law shape her small baby bump with both arms, while my brother wrote out ’16 weeks’ in the sand for a photo op. It was so full of hope, a beautiful sign of my healthy baby niece.

Or the day when we so perfectly timed arriving at the beach just as a rain shower was brewing. The beach was nearly clear of people, except us. We set up all four umbrellas and hunkered down, getting completely drenched. I think we were gloating a little when the sun came out 15 minutes later, the beach to ourselves.

At one point as the sun was setting on the second vacation, I laid down on a blanket and just looked up. I was sure I could see the roundness of the earth in the sky. The sunset displayed itself in large ribbons of orange and pink and purple, and it felt all at once like a corny moment, and a sacred one. Simply because I was quiet and looked around.

This method of perceiving the world can be humorous. Like deciding to drive 14 hours through the night to get home early in the morning.

7pm felt like adventure. I took the first shift of driving, and I was chatty. Excited to be on the road and looking ahead to an entire relaxed day to myself.

10pm felt like bedtime. I questioned whether I’d be able to make it to midnight, and whether we should just get a hotel for the night. And then it was time for Thomas to drive.

3am felt like a craned neck from a poor nap. We snacked on the odd combination of oyster crackers and tropical Skittles. I took over driving again an hour and a half later.

5am felt like a whisper. A slight fog and cooler temperatures greeted me with the blue of early morning. The car was so quiet, with everyone asleep. In one way, it was soothing. In another, it was as if this whisper was more of a taunting. I was so tired. My stomach hurt from weird eating times and lack of sleep, and I so wanted to see home.

And when we finally did, it was glorious.

And I’ve found that the best ones are a result of quieting things around me, rather than controlling them. Accepting them, rather than trying to find a way around them. Not wishing for something else.

Because let’s face it. Tropical Skittles and a dog sleeping in the back seat is a pretty sweet scenario. Even at 3am.